What is panic disorder?

Test yourself: Did I have a panic attack?

If you have an abrupt surge of intense fear that increases gradually to reach a peak within a few minutes plus four or more of the following symptoms:

If you have had

you may have experienced a panick attack. We can help you overcome panic and anxiety. Contact us for an evaluation session at our therapy centre at Pantai Hospital.

Hyperventilation is often associated with panic attacks. It is defined as rapid and shallow breathing that leads to an excessive elimination of carbon dioxide. Falling levels of carbon dioxide in the blood (also called hypocapnea) lead to an elevation of the blood pH (respiratory alkalosis) which in turn causes a variety of symptoms such as dizziness and tingling sensations in the lips, hands or feet.

What is the difference between panic attacks and panic disorder?

Panic attacks are usually one-off experiences and far more frequent than panic disorder. Only if there are recurrent panic attacks, the diagnosis of “panic disorders” can be made.

At least one of the panic attacks has to be followed by one month of one or both of the following:

What other disorders are often associated with panic attacks?

There are certain mental or physical disorders that often come together with panic attacks:

What are the causes of panic disorder?

Panic disorder can be treated by psychotherapy, medication (usually drugs such as selective serotonin reuptake inhibitors (SSRI) that are used as antidepressants) or a combination of both (see picture below for an overview). 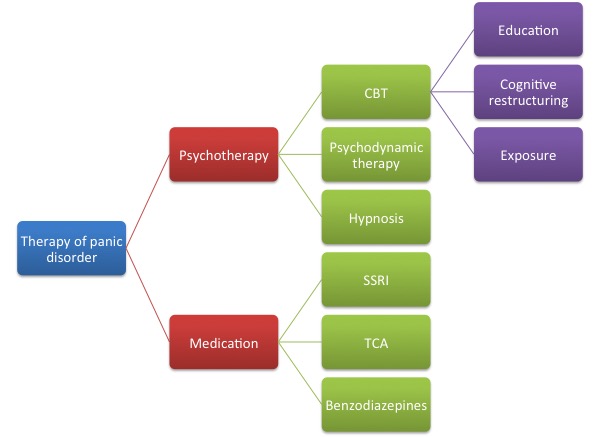 A training in self-hypnosis (or another relaxation method) is an essential in the therapy of anxiety. Patients suffering from anxiety disorders have symptoms of the stress or fight-and-flight response. For example, they could have symptoms such as sweating, tense muscles, fast breathing, and a fast heartbeat. One of the best ways to regain control over such bodily symptoms is self-hypnosis. This very useful tool allows the patient to relax the muscles, slow down the breathing and heartbeat, and find a calm state of mind.

Catastrophic thinking is one of the core elements in panic attacks. A patient with panic disorder might misinterpret some of the symptoms of the fight-or-flight response (e.g. pounding heart, sweating, and fast breathing) as the opening act to a catastrophic event, such as a heart attack or a respiratory arrest. The task of cognitive restructuring is to challenge these interpretations by countering them with scientific explanations.

We can teach patients to relax on a cue by rehearsing this technique in hypnosis and advising the patient to self-practice after the session. For instance, if you start to think about a job interview you have to go for, press your thumb and index finger together (a way of conditioning the pressing together of the fingers with the relaxation response) and go into self-hypnosis for a short while. Or alternatively, take some calming breaths or shift your attention to the sounds, colours, and aromas around you.